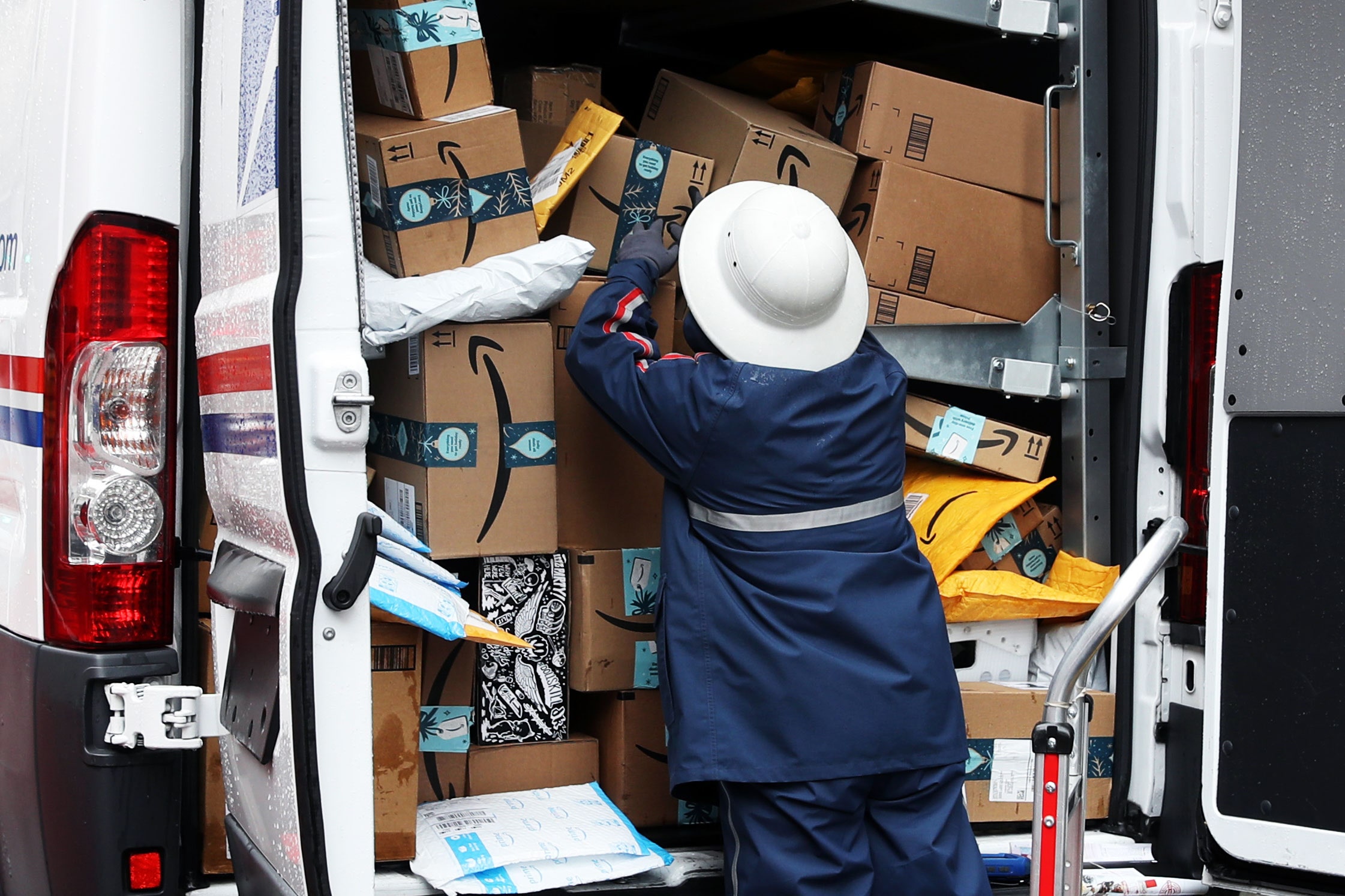 Congress raised concerns this week that the ongoing Covid-19 crisis—and the resulting “critical fall-off in mail” volumes across the sheltering-in-place country—might bankrupt the United States Postal Service in a matter of weeks. “A halt in Postal Service operations could have grave consequences across the country,” two senior members of the House warned on Monday, saying it could be out of money by June.

While Congress said it was most concerned about the Postal Service’s critical role in delivering medicine across the country during the unfolding pandemic—it handled about a billion shipments of prescription drugs last year—the nation’s mail carriers potentially have an even more critical role to play in health emergencies.

If and when a mass vaccine finally arrives for Covid-19, Americans may be surprised to learn precisely who might knock at their door to distribute the life-saving aid: A mask-clad, gloved postal carrier, flanked by a deputy sheriff or National Guard soldier.

Read all of our coronavirus coverage here.

The US Postal Service and your friendly neighborhood postal carriers have always had a unique—though largely unknown—role in the nation’s Doomsday planning. Through much of the Cold War, the Postal Service would have helped register the nation’s dead following a nuclear apocalypse, determined which Americans had been displaced, and where they had all ended up. Special postcards, known as Safety Notification Cards, a.k.a. POD Form 810, asked individuals who survived nuclear war to list who they had survived with and where they were now located. No postage was necessary to mail in the displaced persons postcards, and postmasters were instructed to give the safety cards “priority in distribution and dispatch.”

After the Cold War, plans to convert the nation’s mail trucks to “Emergency Casualty Carriers” were set aside, along with those to burn the nation’s stamp stockpiles in the event of a Russian land invasion of the United States. Similarly discarded are those pre-printed postcards ready for distribution in the post-apocalyptic refugee camps (which, under another quirk of the federal government’s plans, were meant to be run by the National Park Service and located in picturesque national parks like Yosemite that presumably would not have been targeted by Soviet missiles).

Instead, the modern era’s postal Doomsday mission has been geared toward biological threats. Under a little-known Obama administration plan, “Executive Order 13527: Medical Countermeasures Following a Biological Attack,” it would fall to the Postal Service to be the first-line responders to a widespread biological terror incident—think an anthrax attack, where the post office shows up at your door with Cipro. Those plans could potentially be dusted off to help respond to disease epidemic or pandemic.

The Obama order itself makes clear just how atypical the scenario it envisions would be. “The sudden and catastrophic nature of such an event may warrant this departure from normal public health and medical practice,” reads the 58-page memorandum of understanding between the Postal Service and the Department of Health & Human Services. “The task for the USPS is to deploy USPS carrier volunteers to deliver antibiotics to residents at the outset of a catastrophic incident, using the inherent efficiency of the USPS infrastructure.”

Known in government parlance as simply the “Postal Plan” or the “Postal Option,” the medical countermeasures program was a key part of the massive worst-case scenario planning updated after the 9/11 attacks under the broad umbrella of contingency planning known as “Continuity of Government,” “Continuity of Operations,” and its most secretive level, “Enduring Constitutional Government,” the series of plans and special authorities that indicate how the three branches of government would “execute constitutional responsibilities in a catastrophic emergency.”

While the George W. Bush and Clinton-era executive orders outlining ECG remain classified, the Obama-era Postal Plan has been publicly released, although it’s little-known even inside the government. (One former senior Trump administration official I contacted about the Postal Plan in recent days was surprised to learn of its existence, despite being intimately involved in continuity planning.)

The Postal Plan was first developed during Bush’s administration, then codified in Obama’s first year in office. After workshops with 21 pilot cities in 2004, the Postal Service and HHS even conducted three proof-of-concept drills to test the ability of mail carriers to distribute medical supplies: in Seattle in November 2006, then Philadelphia the following June, and lastly Boston that September. In 2008 it ran a much more in-depth pilot program in Minneapolis and St. Paul, Minnesota, including signing up mail carrier volunteers and subjecting them to medical screening and the fitting of personal protective equipment. That trial targeted and tested the ability of 14 post offices and 468 mail carrier routes to distribute medicine to a total 205,000 residences, about a quarter of the Twin Cities.

The highly detailed Postal Plan that grew out of those years of work—a real-life version of Kevin Costner’s laughably bad 1997 post-Apocalyptic thriller The Postman—carefully lays out how life-saving medical supplies would be orchestrated and distributed throughout an affected region, drawing on the unique capability the nation’s mail carriers bring to Doomsday planning. As the Department of Homeland Security has identified in its planning, the Postal Service is, after all, the only government agency with the built-in staff and logistical capacity to knock on every residential door in a given community in a single day, a task that by definition its 600,000 employees perform in most cities and towns in the country six days a week.

As Obama’s December 2009 order reads, “The US Postal Service has the capacity for rapid residential delivery of medical countermeasures for self administration across all communities in the United States.”

The Postal Plan would involve “all available USPS employee volunteers,” and before they were sent out door-to-door each would be provisioned with prophylaxis and barrier protection for themselves as well as their families—a plan that might be easier to achieve in theory than in reality given current supply chain problems. The plan notes that it’s critical for the Postal Service to overstaff its medical countermeasure program: “The USPS will recruit a greater number of employee volunteers than the number of delivery assignments required during detailed delivery planning to mitigate staffing shortfalls among employee volunteers.”

To ready itself for delivering the medical supplies, the Postal Service will first suspend all regular postal delivery in the targeted region, as well as its retail and mail processing operations in the affected delivery zone.

Local, state, and federal law enforcement—including the Postal Service’s own postal inspectors—would be pressed into service for 12-hour shifts protecting the medical supplies and distribution. One law enforcement escort vehicle would be assigned to each truck distributing supplies, and a law enforcement officer would accompany each postal carrier on his or her rounds distributing the medicine. Using specific authorities that are part of what’s known as “Emergency Support Function #13 (ESF-13),” the National Guard would be activated if necessary to supplement security personnel.

For their part, the postal carriers knocking at America’s doors would look like the emergency room doctors treating Covid-19 patients around the world: They would be outfitted with N-95 disposable respirators or masks, protective nitrile gloves, and disposable clothing. (Again, this part seems unlikely given the current lack of masks even for frontline health care professionals.) Volunteer carriers would be forced to complete and pass their own medical screening before they were sent out to meet the public. According to the plan’s estimates, “The equivalent of two normal daily delivery routes could be managed by one USPS carrier volunteer within an 8-10-hour period, since the same quantity of material will be delivered to each residential delivery point and only residential addresses are included.”

One reason for the speed is that it only aims to cover single-family residences, condos, and apartments: “A uniform, predetermined quantity of prepackaged medications will be delivered to each residential mail address along with information sheets provided to postal carriers,” it explains. “Delivery does not include Post Office boxes or general delivery to institutions (for example, nursing homes, prisons, or university mailrooms).” Presumably, authorities would make other plans to deliver the needed medicine in quantity to larger institutions.

The plan imagines that the Postal Service’s efforts would be paid by the Department of Health & Human Services, via the Stafford Act—the powerful emergency disaster legislation that governs much of the federal government’s response to everything from tornadoes to pandemics—and that it would only disturb mail delivery for a day or two in each targeted region.

Paramount among the plan’s requirements are, though, is that the affected regions not be told in advance of the coming special deliveries—presumably to limit any panic or security risk to those distributing the medicines. “Until USPS carrier volunteers have been notified and activated, information provided to the public about the Postal Plan should be limited to a general announcement about the possibility of home delivery as one of several options for distributing medications in some areas,” the plan reads. “Operational details, such as affected ZIP Codes and time frame for deliveries, will not be included at this point.”

For now, while any vaccine for Covid-19 remains months—or a year or more—away, you might want to be extra nice to your mail carrier.

WIRED is providing unlimited free access to stories about the coronavirus pandemic. Sign up for our Coronavirus Update to get the latest in your inbox.