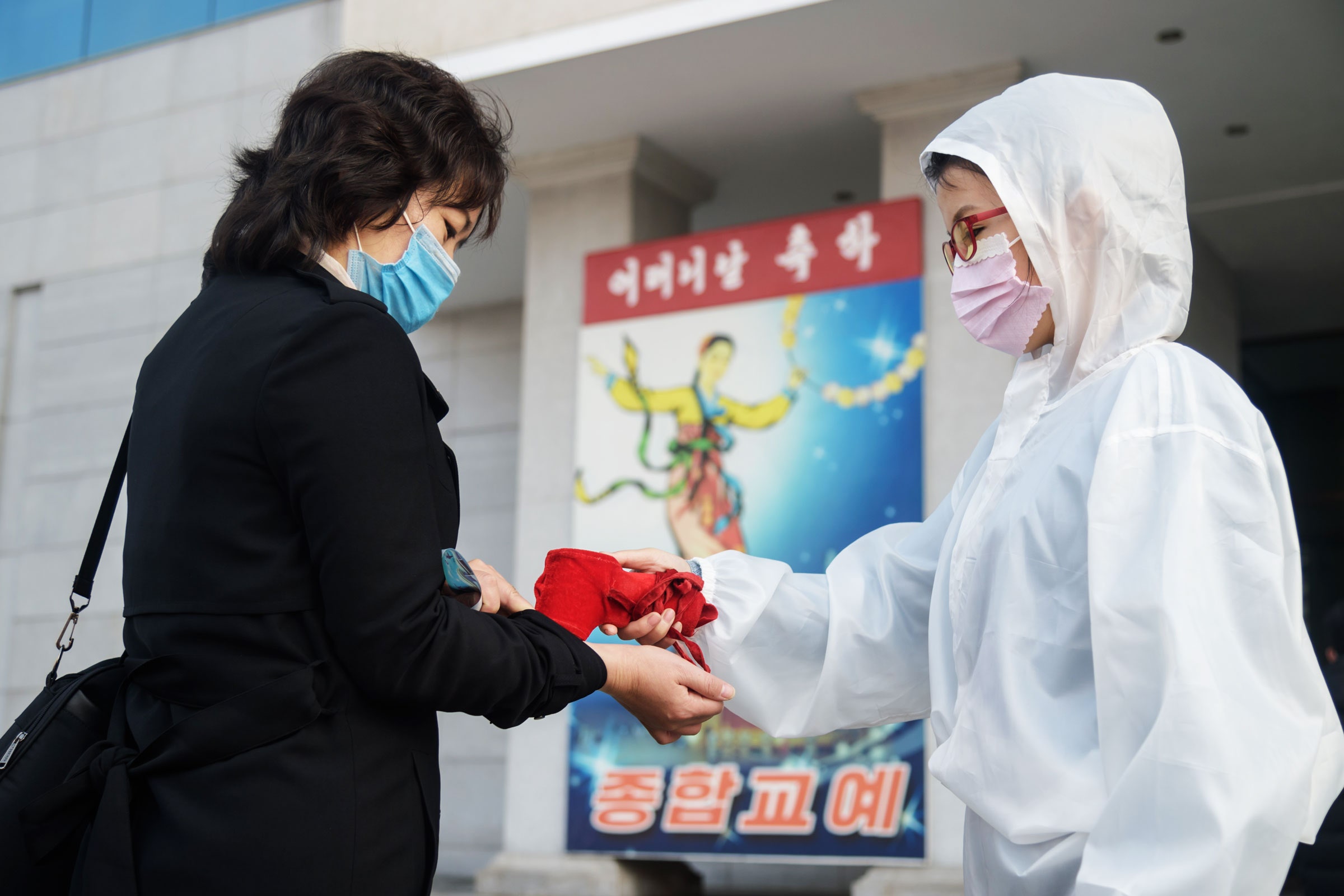 Kim Jong-un acted quickly. On January 22, 2020, North Korea closed its borders with China and Russia to stop a new, mysterious virus from spreading into the country. At the time, what we now know as Covid-19, had killed just nine people and infected 400 others. More than a year later, the hermit kingdom’s border remains sealed tight shut.

North Korea’s response to the pandemic has been one of the most extreme and paranoid in the world, experts say. The lockdowns and quarantines it has imposed have been strict, while border restrictions have put a halt to fishing and the smuggling of goods into the country. At the same time the nation’s state media and propaganda apparatus has pumped out messages warning its citizens of the dangers of Covid-19 and praising the country’s “flawless” approach to the pandemic.

But the real impact of Covid-19 on North Korea—and its citizens—remains a mystery. Faced with a global health crisis, the country has turned inwards more than ever. “North Korea, in general, is more difficult to know this year or last year than at almost any point in the last two decades,” says Sokeel Park, the director of research at Liberty in North Korea, a group that works with defectors from the country to understand what happens inside its borders. “It seems clear to me that, nonetheless, the North Korean government has massively overreacted”.

Officially, North Korea has recorded no cases of Covid-19. Weekly reports from the World Health Organization’s South-East Asia office show that North Korean samples from PCR tests are being processed in 15 laboratories but all of these have come back negative. As of January 8, the most recent date for which figures are available, 26,244 samples from 13,259 people have come back negative. Around 700 North Koreans, out of a population of 25 million, are being tested each week.

“I don't know many people in the North Korea watcher, analyst and journalist community that actually believe there are no cases,” Park says. All of the North Korea experts spoken to for this article agree. Some have accused North Korea of lying, while others suggest its approach is all about keeping control and public perception.

The closest officials got to admitting there may be a case was in July when state newspaper Rodong Sinmun reported a “state of emergency” had been declared in Kaesong City, in the south of the country. The newspaper reported a defector who had returned to the country from South Korea was “suspected” to have Covid-19. But the case was never confirmed. Kim Yo-jong, the sister of Kim Jong-un, has hit back at suggestions from South Korea that the country may have had cases, describing such talk as “reckless”.

From the outside, it is impossible to prove the scale of the Covid-19 crisis in North Korea. All official messaging is controlled by Kim Jong-un’s regime and international diplomats and humanitarian groups have largely left the country. The last remaining members of the International Committee of the Red Cross left the country on December 2. The result is that little reliable information finds its way out of North Korea—those with contacts inside the country and who work with defectors say it has been impossible to work out the reality of the health situation on the ground.

Despite reporting no cases of Covid-19, North Korea has been quarantining potential suspected cases. As of December 3, 33,223 people had been released from quarantine, according to the figures reported to the WHO—though no numbers have been reported since. Quarantine rules in North Korea are also strict, according to reports. When an outbreak occurred in China, North Korea tracked down all Chinese visitors in the town of Rason ​and quarantined​ them ​on an island for a month.

In its attempts to control Covid-19, North Korea has taken a similar, though more extreme, approach to other nations. It has restricted people’s movement and travel, gatherings of people are limited, masks are mandatory and state media has been blanketed with public health information. Such measures are coupled with existing limits on freedoms, human rights abuses, economic failure and food shortages. The country is also subject to wide-ranging international sanctions linked to its development of nuclear weapons.

“They've really reinforced border security with more border guards,” says Jieun Baek, a fellow with the Korea Project at Harvard’s Belfer Center. “They've created buffer zones between one and two metres wide at the border.” The country is reported to have “shoot-to-kill” orders in place to stop anyone bringing Covid-19 inside its borders. South Korean intelligence agencies claim to have uncovered the execution of one Covid rule-breaker within North Korea. In September the country was forced to apologise to South Korea after it shot and burned the body of a South Korean official who was in the North’s waters.

The strict rules North Korea has put further strain on a country already on the brink. New satellite data and analysis from the non-government organisation Global Fishing Watch shows that illegal North Korean fishing in Russian waters dropped 95 per cent last year and fishing in North Korea’s waters dropped 50 per cent in the last part of its season. These findings are in line with border controls placed around the country’s fishing industry.

Meanwhile, within North Korea, the message has been clear: people need to follow the rules. “North Korean state media has been unusually upfront about the need to prevent the virus spreading, describing it as a matter of ‘national survival’ and ‘life or death’,” says Pratik Jakhar, an expert on North Korea at BBC Monitoring.

The state-run media outlets—including TV stations, radio and newspapers—have told people about the symptoms of Covid-19 and broadcast images and videos of workers disinfecting public places. “The coverage appears to send a message domestically that the strict measures Kim Jong-un took have worked, and that he has saved North Koreans from the virus,” Jakhar says. He points to an October 16 article in the state-run DPRK Today that claimed the country is “a uniquely clean land on the planet” and “a place free of infection from the virus.”

When North Korean officials locked down Kaesong City in July, party propaganda said the state had “established a strict and flawless anti-epidemic measure”. In November Rodong Sinmun argued the country must “maintain an ironclad barrier” if it was going to protect itself from Covid-19.

Such extreme steps may reflect the country’s paranoia about Covid-19. “North Korean media have also been pushing out fringe theories and unverified claims on how the virus is spread,” Jakhar adds. “It has warned that smokers are at a higher risk of contracting Covid-19, and that migratory birds or even snowfall could spread the virus”. As reported by NK News, an independent publication reporting on what happens inside North Korea from anonymous sources both inside and outside the country, the warning about snow included advice that people wear a mask, glasses and a cap to protect themselves. While claiming that it has defeated Covid-19, North Korean media has also been keen to point out the spiralling global case count and death toll. Internally, this makes its response look strong.

Earlier this month, at North Korea’s Eighth Congress of the Korean Workers’ Party the country tried to set an example of how normal things are. Thousands of people gathered indoors and outdoors without masks or any form of social distancing during the eight day event. But just days before, at its new year firework celebrations, everyone outdoors was pictured wearing masks. “Image for the regime is really important,” says Jung H. Pak, a former CIA officer and now senior fellow in Korea Studies at Brookings Institution’s Center for East Asia Policy Studies. “And they still want to project this sense that they have got things under control”.

The threat of widespread Covid-19 transmission within North Korea is likely being taken seriously due to its fragile healthcare system. Studies have found the country’s universal healthcare system has “large disparities” and that many people “struggle to obtain healthcare” from the state. “Most people don't have access to hand sanitisers or soaps, much less PPE,” Baek says. “And many people do live in very close quarters.”

Hanna Song, a researcher at the South Korea-based Database Center for North Korean Human Rights, agrees that healthcare is a major concern. “There is a depletion in a lack of medical supplies [during the pandemic],” she explains. “This is not something that we have heard directly from North Koreans but this is something that we predict has been happening.”

The full impact of Covid-19 on North Korea may never be known—at best, experts believe details will trickle out over the coming years. The border controls put in place have been an effective buffer in stopping information coming out. The number of defectors, normally a key source of knowledge for what happens in North Korea, plummeted last year. Recent figures from South Korea show just 229 people entered the country from the North in 2020—an all-time low. In 2019, that figure stood at 1,047.

Despite tough border controls, there’s one thing that North Korea does want to flow freely into the country: Covid-19 vaccines. At the end of November it was reported that state-sponsored hackers had targeted AstraZeneca; South Korea has reported attempts on its own vaccine infrastructure and Microsoft has also found similar hacking efforts linked to North Korea. The country has since quietly requested international help in obtaining vaccines.

Analysis of vaccine distribution predicts that the jabs may be widely available in North Korea in 2022 or 2023. Living under strict controls until then could have a long term impact. Park, from Liberty in North Korea, worries that the country may use the pandemic to keep even stricter control measures in place even once the pandemic is over. “The mode of operating under global pandemic conditions could become a new normal in North Korea,” he says.