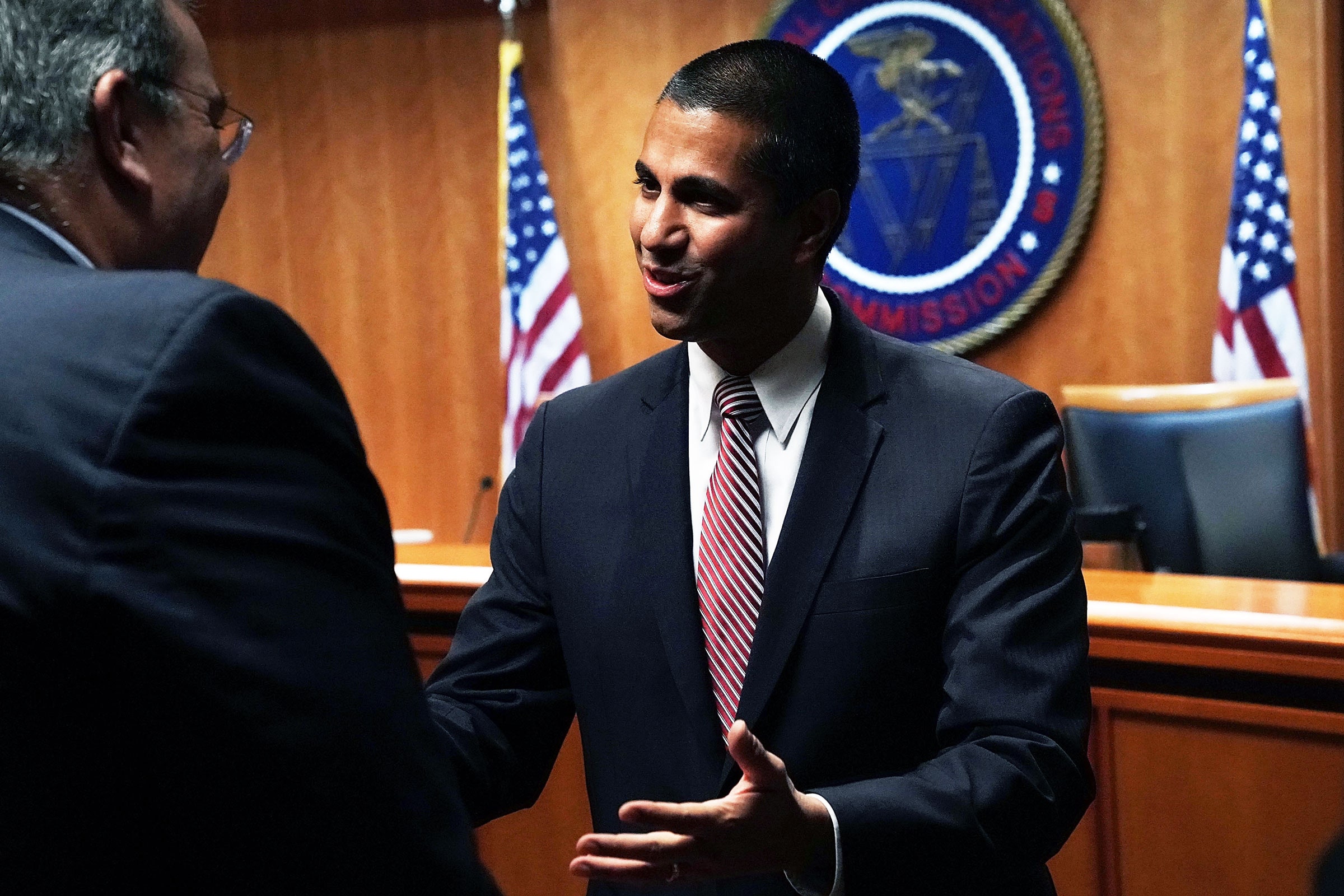 The largest Internet providers in the US funded a campaign that generated "8.5 million fake comments" to the Federal Communications Commission as part of the ISPs' fight against net neutrality rules during the Trump administration, according to a report issued Thursday by New York state attorney general Letitia James.

Nearly 18 million out of 22 million comments were fabricated, including both pro- and anti-net-neutrality submissions, the report said. One 19-year-old submitted 7.7 million pro-net-neutrality comments under fake, randomly generated names. But the astroturfing effort funded by the broadband industry stood out because it used real people's names without their consent, with third-party firms hired by the industry faking consent records, the report said.

The New York Attorney General's Office began its investigation in 2017 and said it faced stonewalling from then FCC chair Ajit Pai, who refused requests for evidence. But after a years-long process of obtaining and analyzing "tens of thousands of internal emails, planning documents, bank records, invoices, and data comprising hundreds of millions of records," the office said it "found that millions of fake comments were submitted through a secret campaign, funded by the country's largest broadband companies, to manufacture support for the repeal of existing net neutrality rules using lead generators."

It was clear before Pai completed the repeal in December 2017 that millions of people—including dead people—were impersonated in net neutrality comments. Even industry-funded research found that 98.5 percent of genuine comments opposed Pai's deregulatory plan. But Thursday's report reveals more details about how many comments were fake and how the broadband industry was involved.

"BFA hid its role in the campaign by recruiting anti-regulation advocacy groups—unrelated to the broadband industry—to serve as the campaign's public faces," the AG report said.

The "primary funders" of Broadband for America's anti-net-neutrality campaign "included an industry trade group and three companies that are among the biggest players in the United States internet, phone, and cable market, with more than 65 million American subscribers among them and a combined market value of approximately half a trillion dollars," the report said.

Comcast, Charter, and AT&T are the biggest members of Broadband for America. Comcast has 31.1 million residential customers in the broadband, phone, and TV categories combined. Charter has 29.4 million such customers. AT&T has 14.1 million internet customers and 15.9 million TV customers, but it's not clear how much overlap there is between those two categories given that many DirecTV users don't live in AT&T's wireline territory.

The report mentions Comcast, Charter, and AT&T specifically without naming other providers. The sole mention of those ISPs came in a sentence saying, "Net neutrality refers to the principle that the companies that deliver internet service to your home, business, and mobile phone, such as AT&T, Comcast, and Charter (often referred to as internet service providers, ISPs, or broadband providers), should not discriminate among content on the internet."

With broadband companies having used third-party vendors to conduct the campaign, the Attorney General's Office said it found no evidence that ISPs themselves "had direct knowledge" of the fraudulent behavior. The broadband companies spent $8.2 million on their anti-net-neutrality campaign, including $4.2 million to submit the 8.5 million comments to the FCC and a half-million letters to Congress, the report said.

Anti-net-neutrality comments were supposed to provide "cover" to Pai.

"The broadband group believed this support—in conjunction with press outreach, social media campaigns, and coordinated filings from the broadband industry and free-market economists— would 'give [FCC Chairman Ajit] Pai volume and intellectual cover' for repeal," the attorney general's report said. "Indeed, one broadband industry executive—himself a former chairman of the FCC—advised members of BFA's executive committee, in an email, that 'we want to make sure Pai can get those comments in so he can talk about the large number of comments supporting his position.'" The NCTA is led by former FCC chairman Michael Powell, a Republican who opposes net neutrality rules and who led an FCC vote in 2002 that prevented common-carrier regulation of cable internet service.

Overall, nearly 18 million out of over 22 million comments "were entirely fabricated and did not reflect people's real viewpoints, with more than 8.5 million of those comments using the names and personal information of real people without their knowledge or consent," the report said.

While the numbers of fake comments were roughly equal in "supporting" or "opposing" net neutrality, the New York report said the broadband industry's campaign to generate fake comments opposing net neutrality was unique in that the "campaign organizers ignored red flags of fraud and impersonation."

"Fraudulent comments that also impersonate individuals, like the millions of comments submitted by the broadband industry, compound the harm by subverting individuals' policy preferences and control over their own identities," the report said.

A 19-year old college student who opposed the repeal of net neutrality was able to file over 7.7 million pro-neutrality comments with the FCC. Unlike the broadband industry efforts described above that used the names and addresses of real people without their consent, these comments used fabricated names and addresses generated by software. The FCC had few safeguards in place to detect or prevent millions of submissions from a single source. The OAG [Office of the Attorney General] also identified another group of 1.6 million pro-neutrality comments that were submitted using fictitious identities but has not determined the source of these comments.

The industry's use of third-party vendors apparently shielded them from direct knowledge of illegal behavior, the report said:

The conduct of these broadband companies and their lobbying firm raises serious concerns. These companies hid their involvement in a multimillion-dollar campaign that generated what turned out to be millions of fake comments. The OAG's investigation has demonstrated that the broadband companies' campaign organizers ignored several significant red flags as to the authenticity of the comments that were generated and the integrity of the process. Their limited oversight over the lead generators they had engaged, and the campaign as a whole, provided a fertile environment for lead generators to engage in fraud and deception.

The industry plan called for using marketing offers to generate comments. Nearly 80 percent of the broadband-industry comments "were expected to be collected through a type of lead generation known as co-registration. In co-registration, consumers are offered rewards—gift cards, sweepstakes entries, or an e-book of recipes, for example—for providing information about themselves and responding to a series of marketing offers," the report said. "Marketing offers varied widely and included everything from discounted children's movies to free trials of male enhancement products. The broadband industry created solicitations to run alongside these marketing offers, asking consumers to join the campaign opposing net neutrality. Responses would be collected and used to generate comments. The remainder of the comments—roughly 20 percent—were to be generated using online ads placed on websites across the internet."

A lead generator called Fluent generated "over 5 million digital signatures for its comments," but emails and database records revealed that "Fluent never obtained consent from any individuals to submit a comment on their behalf. In fact, it never asked a single person for their consent," the report said.

Another 2 million names and addresses used in anti-net-neutrality comments to the FCC came from five coregistration companies that "fabricated all or nearly all of the records of consent they had provided—1.99 million records out of 2.07 million," the report said. Another company hired by Broadband for America "fabricated all or nearly all of the more than 1.5 million records of consent it claimed to have obtained. The personal information that commenters had purportedly entered had, in fact, merely been copied from other sources, including records that had been stolen in a data breach and dumped online," the report said.

Conservative advocacy groups played a smaller role in the campaign. "To conceal the true source of these comments, the broadband industry created webpages for the conservative-leaning advocacy groups through which visitors could submit comments to the FCC supporting repeal," the report said. "Few comments were submitted through these webpages. But the pages created the impression that comments the FCC received had originated from the advocacy groups' websites and reflected true grassroots support."

Besides the fake comments to the FCC, the "broadband industry also sent more than half a million messages to members of Congress purportedly signed by their constituents," the report said. "Internal emails show that the broadband industry submitted these messages, which voiced support for the FCC's proposal, along with press coverage of the comments the industry had submitted to the FCC, to discourage Congress from interfering with the plan to repeal the rules."

The report said there have already been penalties against companies involved in the fake-comment campaign, but not for the internet providers themselves:

The OAG has been working with law enforcement partners across the country to hold those involved accountable. Three lead generators have already entered into settlements with the OAG: Fluent, Inc., React2Media, Inc., and Opt-Intelligence, Inc. The settlements require the companies to pay $3.7 million, $550,000, and $150,000 respectively, for their misconduct. The settlements also impose comprehensive reforms for any future campaigns to protect consumers and prevent fraudulent comments … Investigations into others that engaged in fraud are ongoing. But prosecution alone will not be enough. Public participation in government, a bedrock of the nation's democracy, is under assault. The identities of millions of Americans have been misused.

The lack of evidence that broadband companies "had direct knowledge of fraud" means that the attorney general "has not found that they violated New York law," the report said. "That said, red flags were ignored by the campaign organizers, and the way that they conducted their campaign—hiding the broadband industry's involvement, relying on lead generators that used commercial incentives to lure people to comment, and paying dubious vendors for volume rather than quality—is troubling and raises important policy questions."

The report urged lawmakers to "strengthen laws to better deter deception and impersonation," and impose "meaningful penalties" for unauthorized comments and impersonation. The report also said that government agencies should "implement technical safeguards against automated submissions," noting that the FCC in mid-2017 had "few, if any, measures in place to prevent people from using automated software to submit comments through its website. As a result, a 19-year-old college student using software was able to single-handedly submit more than 7.7 million fabricated comments in the net neutrality regulatory proceeding." The report acknowledged that "federal agencies have begun to take steps to address the issue" since the net neutrality proceeding.