For much of August and September of this year I was forced into ‘working from home’, something I don’t normally do. So with zero globetrotting/commuting/working out/interviews/speeches and other daily workday chores, I had rather a lot of time on my hands. So I read. Lots. There was plenty of the usual bad news, but, occasionally, there was some very good news in there too. In particular, there was good excellent news from the front in the fight against patent trolls: a district court of Texas rejected Uniloc’s lawsuit against us for infringement of patent US5490216. This is the infamous patent that since the early 2000s had struck terror into the hearts of IT companies, added years to the appearance of many a patent lawyer, and mercilessly lightened the wallets of more than 160 (!) companies – including Microsoft and Google, no less.

But the excellent news doesn’t stop there folks!…

The combined efforts of the IT industry have secured the invalidation of the IT patent-from-hell. But it’s not just the invalidation itself that’s worth celebrating; also worthy of champagne quaffing is the fact that the invalidation heralds serious (albeit long overdue) change in the U.S. patent system. Sure – it’s only ‘slowly but surely’ for now, but slowly is at least better than no change at all; especially when the changes have global significance: at last the IT industry can start to pluck the patent parasites off its back that do nothing but bloodsuck hinder technological development.

The ball hasn’t merely started rolling, it’s racing down the hill: developers are becoming freer in what they can do – protected against persecution from owners of (excuse my Belgian) BS patents: those describing abstract and at times blatantly obvious things, which in practice aren’t even applied or are used only for ‘milking’ developers of similar technologies.

All told, the story of patent ‘216 reads much like a thriller – so much so that I thought I’d retell it here for your thrill-seeking pleasure. So go get a coffee (better – popcorn) and settle back down for a mini-nailbiter from the patent parasite side… 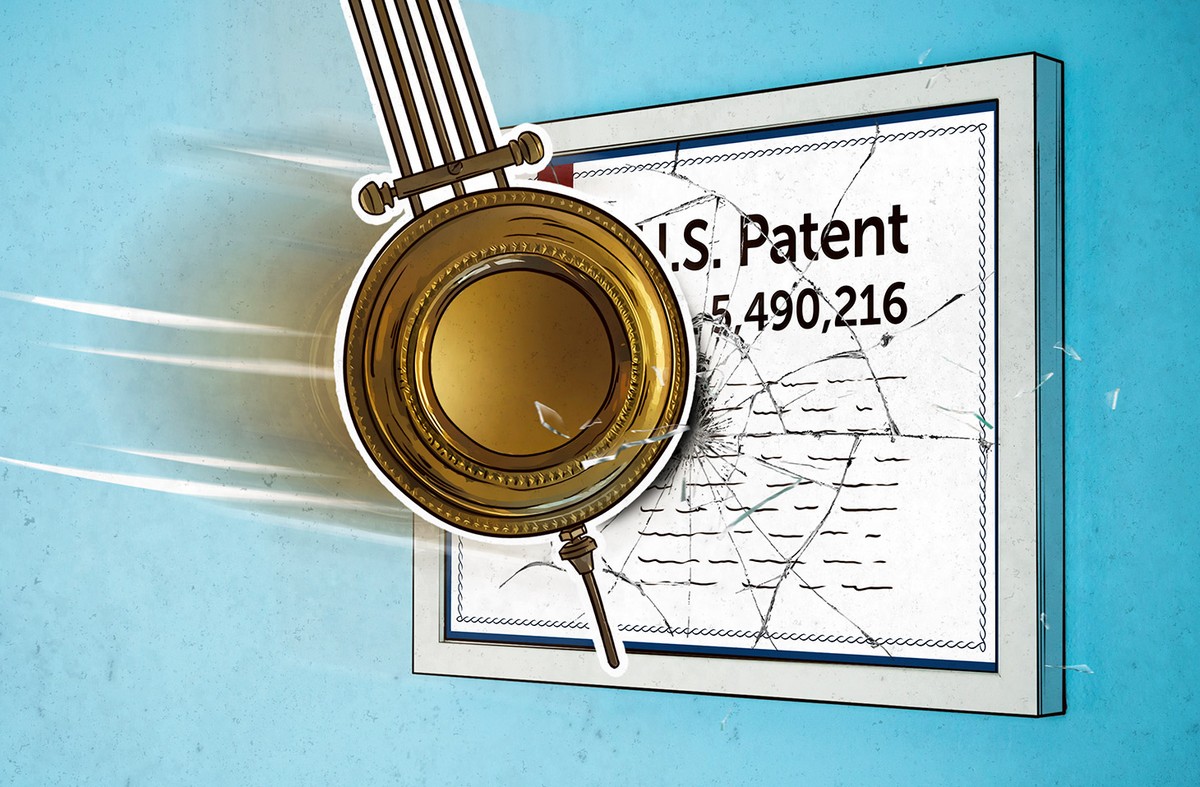 Uniloc Corporation was founded in Australia in 1992. Back then it did wholly worthwhile, creative activity – developing solutions for IT security. In that same year one of its technologies for protection from software piracy becomes protected by U.S. patent 5,490,216.

But some years later the company’s business development took a sharp turn to head off in a completely different direction. In 2003, it set up a network of subsidiaries, whose only activity was… let’s call it ‘matters connected with licensing’. And straight off the bat, they go straight for the big(gest) guns: suing Microsoft for infringement of patent ‘216!

But first – a few words about the patent itself…

The patent covers a software activation method that protects a copy of software from being used on a different device. In other words, it’s to stop a license being used on tens of thousands of computers.

The activation process consists of the creation of a unique identifier at the user’s end based on details such as time, hard drive serial number, user’s name and address, company name, payment information, and a whole load of others. A unique identifier using the same algorithm is also created at the server’s end, which is sent to the user for a comparison of the identifiers; if they’re the same – the software is activated. It was infringement of this ‘patented process’ for which all respondents were eventually charged. For indeed, many companies use comparisons of hashes of this or that data for all kinds of checks.

But the devil was in the details – details the respondents didn’t seem to review carefully for 15 years. If they had, they’d have put a stop to the patent extortion.

So, in September 2003 Uniloc files an action against Microsoft. The case runs on for six years, until in 2009 the court rules in favor of Uniloc, awarding it damages of $388 million. After a series of appeals from both sides, the case reached the Federal Circuit Court of Appeals. But after the hearing there Microsoft and Uniloc settled out of court for an unknown – though no doubt huge – figure.

A key moment in this patent opera was the decision of the court in 2009. It clearly gave Uniloc a whiff of the big bucks, because henceforth Uniloc filed actions against IT companies in spades. It also emboldened Uniloc to buy up new patents, in so doing becoming known as the Patent Troll-in-Chief. Why bother with long-term heavy investment into research and development? This was where the easy money was to be made! So, the programmers were replaced by high-end patent lawyers who – following the patent troll template – did nothing but suck funds out of the IT industry: funds that could have been spent on development of useful products and services.

Playing into the hands of the patent troll was the reaction of many of the IT companies Uniloc went after. Given the compelling example of the costly Microsoft defeat, many respondents preferred to feed the troll settle out of court: “Well, if Microsoft couldn’t beat them, we sure won’t”. And the respondents that did put up a fight? They ultimately lost. But then, on October 18, 2013, it was our turn to receive an action for patent infringement from Uniloc.

Now, those of you, dear readers of my blog, who follow my communiques on our relations with patent trolls, will probably recall our motto: ‘We’ll fight the trolls until the last bullet – their last bullet’. Indeed, feeding trolls is something we’d never do: it just goes soooo against our business philosophy. So each patent infringement action that comes our way we simply calmly counter until we get ourselves a victory. (And of late we’ve found that it’s better to go on the attack against the trolls to nip their parasitic tendencies in the bud before they even think of sending us an infringement claim).

This case is no exception, so we just got down to work…

We pored through all the patent’s documentation and – low and behold – found significant differences between our technology and the patented one. So we patiently sailed through all the different stages of the court proceedings by carefully calculating our possible moves, preparing our argumentation accordingly, and adapting our position as and when necessary. In parallel, a legal procedure seeking invalidation of the patent in the U.S. Patent and Trademark Office was begun, helped by the fact that the Leahy-Smith America Invents Act had already (in 2011) come into effect (which introduced several very timely legislative changes into the patent system).

Then, later (in September 2012) under the same America Invents Act, there were launched two important new procedures for contesting the validity of a patent at the Patent Trial and Appeal Board (PTAB): (i) the ‘Inter Parties Review’ (IPR), according to which the patent applicant (the party questioning the validity of a patent) can demonstrate ‘reasonable likelihood’ of invalidity of the given patent; and (ii) the Post Grant Review (PGR) procedure for invalidation of recent (issued within the previous nine months) patents if the patent applicant can demonstrate invalidity as ‘more likely than not’! (Yes, these semantic peculiarities of U.S. legislation can be baffling at times:)

Compared with the standard – court – procedure of disputing a patent, these new procedures are much quicker (~one year instead of two-and-a-half years), cheaper ($250K instead of $1.5-2M), and – most importantly – simpler and more professional: IPR/PGR decisions are taken by professional patent experts instead of a jury; patent formulas are examined more carefully (although prior art is limited to just patents and printed publications); and, finally, the required argumentation level is lower (‘likelihood’).

Now, one could be forgiven for thinking that that’s that – these new regulatory mechanisms will have seen off patent trolls once and for all. But not so fast!…

Both procedures in practice turned out to be rather complex; this fact, together with their untested newness, made their application early on slow, and the results they would return were somewhat vague. Nevertheless, many companies jumped at the chance of using them in their attempts at invalidating patents, and this played a positive role: patent trolls being attacked on all sides and with different kinds of argumentation significantly upped the chances of success. Oh… and talking of success… fast forward to 2016 – and the notorious patent ‘216 finally earned its deserved status of invalid!

The applicants proved to the PTAB that the priority of this patent should be determined as the date of the U.S. patent application (September 21, 1993), not the vaguely written Australian patent application (yes, to get a patent in the U.S. the priority of a patent or application submitted in another country can be used). Why? Because the Australian and U.S. applications in this case weren’t identical. In the Australian application there was no disclosure of the respective key elements (but for infringement of which they successfully sued Microsoft)! Then, later, an earlier patent was presented covering a method of generation of unique identifiers for protecting against software piracy, which served as the last nail in the coffin of patent ‘216’s validity.

You think the story stops there? Uh-uh!

Patent lawyers had to wait another two years until the verdict of Uniloc’s appeal and the decision of the Supreme Court – to which the trolls turned disputing the constitutionality of the new procedures for invalidating patents! But all’s well that ends well…

The appeal was thrown out and the Supreme Court confirmed the constitutionality of the PTAB’s procedures. So yes – at last, finally: I do believe we are gradually moving toward a new era of patenting. An era oriented at protecting the intellectual property of real inventors, developers and tech businesses, which bring us real progress through their innovations. An era with new, fair rules for the protection of technologies – without abstract and obvious ideas or algorithms (a tip of the hat here goes to the Alice precedent). The ‘patentability’ of inventions now demands more than generic representations of abstract ideas.

These new developments and practices in the patent industry bring the much-needed certainty that’s been so long overdue: finally, the travesty of justice that goes by the name of ‘patent trolling’ is coming to an end. To the very end? Hmmm. We’ll see…

In the meantime, I’ll close this post with a quote from Winston Churchill, which precisely characterizes the current state of affairs in the world of patents: ‘Now, this is not the end. It is not even the beginning of the end. But it is, perhaps, the end of the beginning.’