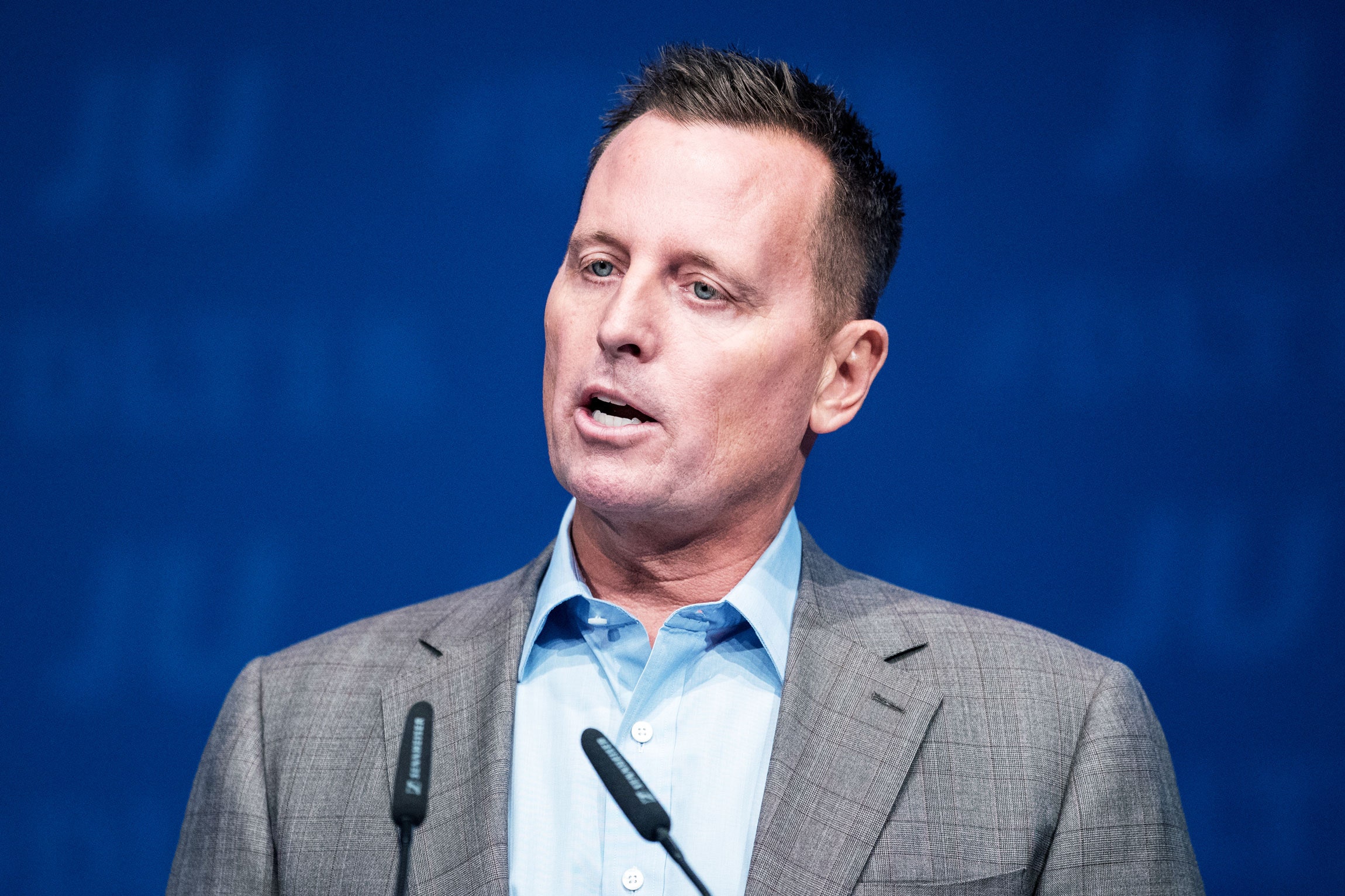 Acting director of national intelligence Richard Grenell is just the latest in a cascade of temporary or vacant personnel in critical government positions.

As Richard Grenell, the current US ambassador to Germany, starts his second day on the job as the nation’s acting director of national intelligence, his arrival also marks the ouster of not only his predecessor, Joseph Maguire, but reportedly also of DNI principal executive Andrew Hallman. By the end of the day, almost all of the roles created after 9/11 literally to prevent the next 9/11 will be either vacant or lack permanent appointees.

While vacancies and acting officials have become commonplace in this administration, the moves by President Donald Trump this week represent a troubling and potentially profound new danger to the country. There will soon be no Senate-confirmed director of the National Counterterrorism Center, director of national intelligence, principal deputy director of national intelligence, homeland security secretary, deputy homeland security secretary, nor leaders of any of the three main border security and immigration agencies. Across the government, nearly 100,000 federal law enforcement agents, officers, and personnel are working today without permanent agency leaders, from Customs and Border Protection and Immigrations and Customs Enforcement to the Drug Enforcement Administration and the Bureau of Alcohol, Tobacco, Firearms, and Explosives.

All the posts, and many more top security jobs, are unfilled or staffed with leaders who have not been confirmed by the Senate. Trump has done an end-around, installing loyalists without subjecting them to legally mandated vetting and approval by Congress.

Trump’s surprise ouster of Maguire, who took over as acting director of national intelligence last summer, came apparently in a tantrum over a congressional briefing that outlined how Russia is already trying to interfere with the 2020 election and help reelect Trump.

But understanding the true cost of Maguire’s firing requires understanding how the role first came to be. The director of national intelligence position was created after 9/11 specifically to coordinate the work of the nation’s 17 intelligence agencies and help “connect the dots” on disparate data and threats, work that wasn’t done before September 11, 2001. DNI is an immensely challenging job that includes serving legally as the president’s top intelligence adviser, and traditionally involves giving the president’s daily briefing on potential threats. It has bested many of its previous office-holders, who found it a perilous position with immense responsibility but little direct authority.

As part of that reorganization, Congress also created the National Counterterrorism Center, meant to bring the FBI, CIA, and other key partners together in one building to ensure full visibility and cooperation into terrorist threats.

Maguire, a former admiral who had been the NCTC head before assuming the acting DNI responsibility, has now been replaced Grenell, by a political loyalist with scant knowledge of the intelligence world. Grenell’s experience pales in comparison even to previous Trump appointee Dan Coats, who had only served as a member of the Senate intelligence committee. In a job that legally requires its nominee to have significant intelligence experience, Coats’ predecessors had all been admirals, generals, intelligence agency leaders, or former top White House officials.

Grenell has none of that background. He also confusingly appears to be continuing both as the US ambassador to Germany—a job that seems difficult to fulfill from the intelligence community’s headquarters at Liberty Crossing in McLean, Virginia—and the administration’s special envoy to the Balkan peace negotiations.

Meanwhile, the clock on Grenell’s tenure as acting DNI is already ticking; for him to stay more than three weeks, Trump must nominate a new director by mid-March to restart the clock of the Federal Vacancies Reform Act, which is meant to limit the authority of non-Senate-confirmed officials. (If that nomination fails or other nominations come and go, Grenell could stay on indefinitely.)

The enduring vacancy at Liberty Crossing is indicative of an increasingly hollowed-out executive rank in government that will surely only worsen this year. The Justice Department has no third in command—the associate attorney general role has been vacant for more than two years now, ever since the departure of Rachel Brand—nor is there a Senate-confirmed administrator or deputy administrator for the DEA, which is a key part of the nation’s intelligence community. The ATF, a billion-dollar law enforcement agency with 5,000 personnel, hasn’t had a Senate-confirmed leader for five years.

The State Department, which has slowly refilled its ranks since it was decimated under Trump’s first secretary of state, Rex Tillerson, is today the most staffed Cabinet Department, but it still lacks numerous key positions. Three of its six undersecretary positions, its chief legal officer, and its general counsel roles are all either vacant or filled with acting personnel.

At a time when the Trump administration is confronting the restarted nuclear programs of both Iran and North Korea, the State Department’s Bureau of Arms Control, Verification, and Compliance is being led by a deputy assistant secretary because there’s no undersecretary or assistant secretary.

By the end of the day, almost all of the roles created after 9/11 literally to prevent the next 9/11 will be either vacant or lack permanent appointees.

As part of his ongoing post-impeachment purge, Trump last week fired Gordon Sondland, the ambassador to the European Union, but there’s also no permanent assistant secretary for European and Eurasian affairs, nor a US representative to the Organization for Economic Cooperation and Development, a key group of advanced western nations. As the US confronts a rising and aggressive China, it lacks a representative to the Association of Southeast Asian Nations, the closest analogue in Southeast Asia to NATO or the EU. There’s no ambassador to Afghanistan, as the US tries to negotiate its way out of a nearly two-decade war there, nor of course in the wake of impeachment and Trump’s purges is there a permanent US ambassador to Ukraine.

At the Pentagon, Trump earlier this week ousted the undersecretary for policy, John Rood; there’s also no undersecretary for personnel and readiness. Trump’s navy secretary, Richard Spencer, resigned last fall amid the controversy of Trump’s decision to go outside normal command channels and block a punishment for a Navy SEAL convicted of war crimes, and the job continues to sit vacant—he announced a choice in November, but has yet to submit the paperwork to the Senate.

No department is in worse shape than the Department of Homeland Security, itself a post-9/11 creation meant to bring together under one roof the key agencies that protect the nation’s infrastructure, transportation, and borders.

April will mark a full year since DHS’s last Senate-confirmed secretary, Kirstjen Nielsen, was fired after not tackling border security aggressively enough for Trump. From April to November, the department was led by acting secretary Kevin McAleenan, who had been the Senate-confirmed CBP commissioner.

CBP is the nation’s largest law enforcement agency, with more gun-carrying personnel than the Coast Guard. It has only had a Senate-confirmed leader for 11 months of the more than three-year-old Trump administration. Today, it’s led by acting commissioner Mark Morgan, who had spent six weeks as the head of ICE before moving to CBP last July.

To the casual observer, Morgan’s move to lead CBP would mean that both he and his successor at ICE, Matthew Albence, would have hit their respective 210-day limits as “acting” officials at the end of January. Yet thanks to the quirks of the Federal Vacancies Reform Act, the math isn't actually that simple.

Earlier this month, Stanford’s Anne Joseph O’Connell walked me through how CBP and ICE’s leaders appear set—legally—to stay on indefinitely. Albence is technically no longer the “acting director,” although he still leads ICE. Instead, he’s now the “senior official performing the duties of the director,” a term of art that has become all too common, and lets Albence continue in the role without Senate confirmation. (Two watchdog groups filed suit earlier this month, saying that because ICE has actually never had a Senate-confirmed leader during the Trump administration, Albence is in violation of the Vacancies Acts act.)

The question of the legal leadership of CBP is even more tortured. Since McAleenan was confirmed by the Senate as CBP commissioner, the role was still technically filled even during the nearly six months he led the overall department as acting secretary. The job of CBP commissioner didn’t technically become “vacant” until McAleenan left DHS in mid-November, meaning that the first four months of Mark Morgan’s tenure at CBP don’t actually count toward his 210-day limit. There’s no sign Trump is in any hurry to name a Senate nominee to lead the agency, so if Morgan is still acting commissioner when his new clock runs out in mid-June, he too could just be delegated the “senior official performing the duties of” and continue on.

"Delegation of non-exclusive duties functions currently as a complete workaround to the Vacancies Act’s time limits as almost nothing is exclusive to these positions by statute,” O’Connell told me earlier this month. “Most of DHS is working through delegation right now.”

Indeed, looking across DHS there’s a troubling and unprecedented vacuum of leadership. The deputy secretary is actually the “senior official performing the duties of,” because the Trump administration underwent various legal contortions to install Ken Cuccinelli, whom it recognized would get Senate approval. Other technically “vacant” positions filled by “senior officials performing the duties of” include the department’s undersecretary for management, the undersecretary for science & technology, and the director of the US citizenship and immigration services—meaning that there’s not a Senate-confirmed leader of any of the three key border and immigration agencies. Similarly, the undersecretary for the office of strategy, policy, and plans, Chad Wolf, is actually the acting secretary of the entire department, so his deputy is filling in that role.

That list doesn’t even count the numerous other positions that are all either vacant or filled with acting officials at DHS: chief of staff, executive secretary, general counsel, chief financial officer, chief information officer, chief privacy officer, deputy undersecretary of science and technology, deputy administrator of TSA, assistant secretary for countering weapons of mass destruction, and assistant secretary for public affairs.

The changes, upheavals, and empty offices at DHS come so quickly that the department seems unable to keep its own org chart up to date: As of Friday morning, it still listed Daniel Kaniewski, who was technically the third-ranking official at FEMA, as filling in as the acting deputy administrator, the agency’s number-two official overseeing the nation’s disaster responses.

Kaniewski actually left FEMA in January, meaning that both its #2 and #3 jobs are actually vacant. The US hurricane season starts in 10 weeks.