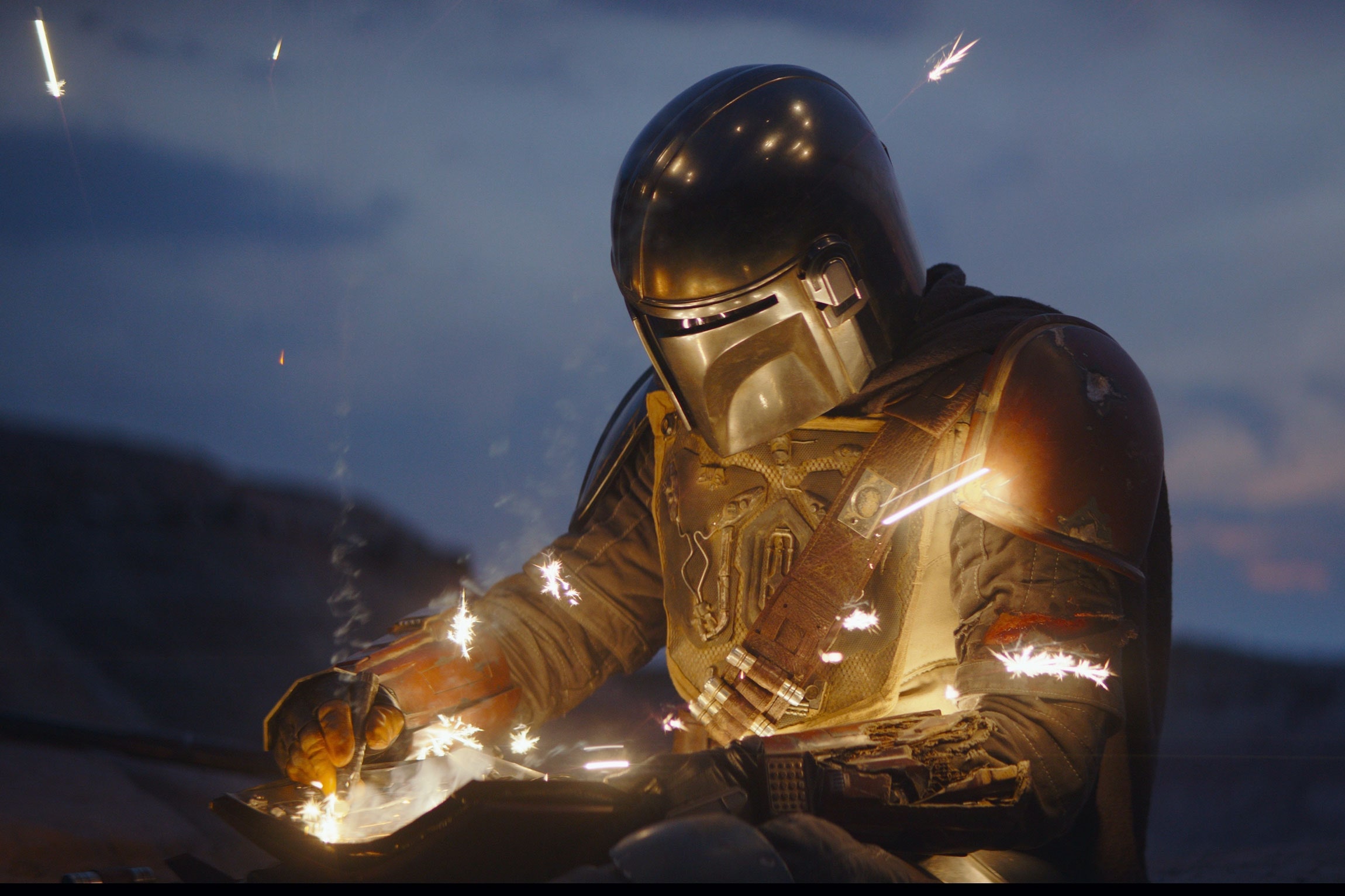 It took decades, but the galaxy finally has a tactical and operational genius.

After nine Star Wars movies, two Star Wars stories, and countless TV show episodes, The Mandalorian has finally given us something utterly priceless. No, not Baby Yoda—although, yes, I would die for that damn thing. I refer to the Mandalorian himself: a protagonist who finally understands military tactics.

He’s an expert at cover and concealment. He actually aims his shots. In the Mandalorian, the Star Wars universe for the first time has a character who engages in believable combat. As if that weren’t enough, the show also introduces Cara Dune, an ex-Rebel special forces operative turned mercenary who also has tactical chops. (Some spoilers ahead.)

The show itself is a masterpiece of low-key military moments. It nails details as small as the way Stormtroopers move with their blasters at shoulder level, prepared to fire. It also offers a corrective to most TV shows, in which the method of helping a casualty is to run up and try to render first aid as bullets—or in this case, blasters—fly all around them. That's a great way for both people to end up shot, which is why the military advises the method that Cara Dune adopts when the Mandalorian gets wounded in a firefight in the last episode: Drag the casualty into cover for assessment while providing vast quantities of covering fire. Cara Dune would receive a “go” for all the performance measures for this US Army medical task.

Since they don’t have any weapons systems capable of destroying the AT-ST, they take a tip from the Ewoks.

That same season finale also features a conversation between two scout troopers that amounts to some of the most realistic military dialogue I’ve heard not just in Star Wars but any movie or TV show. They might as well have transcribed two random soldiers on guard detail somewhere. Substitute throwing rocks at other rocks for shooting at debris with blasters, and you’ve got yourself an accurate depiction of bored troops.

But nowhere is the tactical expertise of the two mercenaries more evident than in the near-perfect defensive engagement that the Mandalorian and Cara Dune conduct in the show’s fourth episode, Sanctuary. As an engineer officer, nothing is more sacred than defensive warfare—and this was well-nigh spiritual.

Defensive stands gone wrong is a mainstay of the Star Wars universe. Just look at Hoth: no obstacles, no defense in depth, no plan, just a lot of dead Rebel grunts getting stepped on by Imperial armor. So it’s very satisfying to find out that at least one mercenary paid attention in Building an Adequate Defense Against Infantry and Light Armor 101, a class that I assume gets taught somewhere in the Empire or Republic’s finest military academies.

In tandem with Cara Dune, the Mandalorian finds himself protecting a friendly little village from a gang of rapacious outlaws. Even worse, the gang has managed to acquire an AT-ST Imperial walker from the detritus of the Empire. After the Empire fell apart—shades of the Soviet Union in the ’90s—its military tech seems to have wandered off to the highest bidder. Or really any bidder, since the failure of the Imperial credit, the main currency of the Galaxy, has left people happy to make even a little money. And so what should have been an easy fight becomes much more daunting.

To their credit, the Mandalorian and Cara Dune readily identify their priorities of work: establish obstacles, build protective positions, and train the villagers to fight. Since they don’t have any weapons systems capable of destroying the AT-ST, they take a tip from the Ewoks in Return of the Jedi and the Finns in the Winter War of 1939: Use your environment instead. Maybe Dune was on the moon forest of Endor when Ewoks took down armor with log obstacles; if so, she’d be the one person in the Star Wars universe to actually absorb some lessons learned.

The villagers take advantage of their aquaculture lifestyle to dig their ponds even deeper, with the hope that a wrong step will force the AT-ST off-balance and make it collapse—the great drawback to all of the Imperial Walker family of armored platforms. (One might wonder why the Empire deviated from the armored vehicles of the Old Republic. Republic armor platforms used by the clone army were lower to the ground and had a better center of gravity. They featured more guns and greater all around coverage, including a main turret gun—although the gunner was left to hang out on his lonesome in an open cupola. These battle-proven tanks provided evenly matched firepower and mobility, but one nasty feature degraded their protection: proximity to the ground rendered them and their clone-trooper crews vulnerable to surface-laid mines. This likely explains why the Empire’s R&D teams opted for the leggy variant of armored vehicles with the heavy AT-AT and the lighter AT-ST.)

Under the direction of the Mandalorian, the villagers also place earthen and wooden obstacles to bar entry into the village, forcing dismounted attackers either expose themselves to blaster fire or do take an unpleasant swim. Either way, they’ll be targets for the marksmen that the Mandalorian has trained. If the enemy makes it past the first two obstacle belts and closes within hand-to-hand range, they’ll encounter villagers whom Cara Dune has instructed in good ol’ fashioned spear fighting.

The Mandalorian and Dune smartly lure their enemies right into their engagement area, thereby forcing the bandits to fight on the ground of their own choosing. Sun Tzu would be proud. The obstacles canalize the dismounted assault into just a few lanes, where the villagers use blaster fire to gun down the attackers. Wielding spears, the villagers then engage any who managed to penetrate the protective obstacles. The feared AT-ST makes it to the edge of the obstacle belt but the tankers realize that if they advance further, they’re going to take a very permanent dunk in the pond. In the grand tradition of armor, they opt to engage at range and let their own infantry do the fighting.

This, of course, won’t work for the overall defense plan, so Cara Dune engages in a one-person anti-armor expedition to draw out the AT-ST, hiding in the water and engaging it at close range. Without infantry support to deal with this hidden threat from the water, the AT-ST commits too fully. The tankers push it one step too far when trying to get a shot at Dune, and the whole armored vehicle crashes down into the water. Seeing the enemy armor vulnerable, the Mandalorian hits it with a thermal detonator and destroys it. Textbook.

In its lone engagement set-piece, The Mandalorian nails the age-old tenets of warfare: Build your obstacles in depth and of multiple types, and never leave your armor without infantry support.

Ironically, it takes a mercenary to finally demonstrate some of the basic tactical skills lacking through the rest of the Star Wars universe. Although most of the show is based less on large-scale military operations and more around lone gunfights, snappy dialogue, and some excellent chases, The Mandalorian still manages to capture a certain feeling of military realism. If season one is any benchmark, the generals of the Republic and the admirals of the Imperial Navy should step aside. The galaxy finally found a tactical and operational genius.

Angry Staff Officer is an officer in the Army National Guard and a member of the Military Writers Guild. He commissioned as an engineer officer after spending time as an enlisted infantryman. Angry Staff Officer blogs at www.angrystaffofficer.com and tweets at @pptsapper.